Mother of two, former senior accountant and now volunteer, Petra, 46, Perth was diagnosed with bipolar disorder at the age of 27, after years of struggling with crippling childhood anxiety. 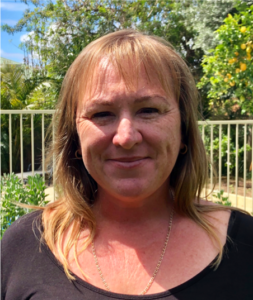 Petra has undergone extensive psychiatric and psychological treatment throughout her life. During her teens, Petra was moved from school to school, and often experienced severe bullying. She has sustained breakdowns, episodes of depression, extreme sadness, self-induced vomiting, pacing, rocking and catatonia.

Petra has nonetheless been grounded by an unfaltering and supportive husband who has embraced her illness and been there for her every step of the way.

Both Petra and her husband feel concerned about the genetic component of bipolar disorder and its potential impact on their children’s lives.

Petra manages her illness with medications and is participating in the Australian Genetics of Bipolar Disorder Study to help raise public awareness of, and assist researchers to identify, the genes responsible for bipolar disorder to ultimately improve treatment for the illness.

This is Petra’s story.

Petra has lived with psychological conditions since childhood. She moved school 15 times due to her father’s career as an engineer. Severe bullying often occurred at her new schools, with students targeting her weight. It led Petra to seek psychological intervention for her anxiety, extremely high stress levels and self-induced vomiting.

“It’s hard to know whether all the bullying and anxiety I experienced as a child was the start of it all, but at the age of 26, I was under a great deal of financial stress and experienced a massive breakdown. It was only after that episode that I was given a diagnosis of bipolar disorder,” said Petra.

“Even though I’m on medication now and I’m ok for the most part, my illness is always at the back of my mind. I worry about whether my illness will affect my children and I worry about what would happen should I ever drop the bundle again.

“I would never want to end up back where I was with suicidal thoughts and crying inconsolably,” Petra said.

Petra has been subjected to the stigma surrounding bipolar disorder.

“There’s a stigma associated with bipolar disorder. The illness is difficult for people to grasp. But just because you can’t see it, doesn’t mean the illness doesn’t exist.

There is a history of psychoses in Petra’s family.

“My father’s aunt was severely depressed and one of my cousins also has bipolar disorder.

“My father passed away recently. There’s definitely a family history. However, that’s mostly from my father’s side. It makes me concerned about the future welfare of my children, and their children,” Petra said.

Petra is encouraging Australian adults who have been treated for bipolar disorder to volunteer for the Australian Genetics of Bipolar Disorder Study – a ground-breaking international collaboration exploring the genetic risk factors associated with the illness and how genes influence one’s response to treatment. QIMR Berghofer Medical Research Institute is leading the research and Petra genuinely hopes her contribution will allow experts to unravel some important answers to help combat bipolar disorder.

“The more we know about bipolar disorder, and the greater that data available, the better informed our community will be, which should help to reduce the stigma associated with the illness.

“Bipolar disorder has truly affected my life, sometimes in an incredibly negative way. I have to be aware of my condition and make sure that I am constantly aware of how I am travelling mentally. So I’m fully supportive of this study that aims to shed more light on the illness,” said Petra.

By sharing her story, Petra hopes to empower others experiencing symptoms of bipolar disorder, to seek the professional help they may require, and to urge those who have been treated for the illness to volunteer for the Australian Genetics of Bipolar Disorder Study.

“I encourage anyone with symptoms of bipolar disorder to visit their doctor because this complex illness requires medication and professional support,” Petra said.