Happily married mother of two, writer, mental health advocate, and part-time veterinarian, Anita, 45,Brisbane, has lived with bipolar I disorder for the past 12 years. During this period, she has battled symptoms of mania, delusional thinking, psychosis and catatonic depression.

Anita either is functioning well or is non-functional. When 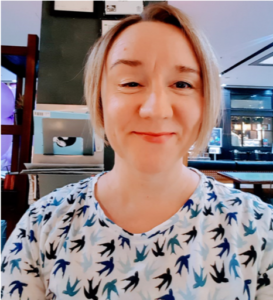 she is well, she is able to work, care for her children, and enjoy spending time with her husband and friends. When unwell, Anita is “completely wiped out”. She experiences extreme irritability, has racing thoughts (delusional thinking), pressured speech, and cannot sleep. When catatonic, Anita struggles to eat and move and is almost unrecognisable.

Anita has bravely chosen to share her lived experience with bipolar I disorder to help destigmatise the mental illness through her website and blog – anitalinkthoughtfood.com. She is also a Peer Ambassador for the national mental health charity, SANE Australia.

Anita is participating in the Australian Genetics of Bipolar Disorder Study to help raise awareness of, and assist researchers to identify the genes responsible for, bipolar disorder to ultimately improve treatments for the illness.

This is Anita’s story:

“At the age of 32, I experienced a sudden, extreme onset of bipolar I symptoms after the birth of my first child, a daughter. I had had no prior symptoms. I endured a 33-hour-long labour ending in a caesarean, on only two hours of sleep,” said Anita, noting sleep deprivation is a huge risk factor for triggering bipolar disorder.

“Afterwards, I couldn’t sleep at all in the maternity hospital, and was probably becoming manic. On the morning I was due to be discharged from hospital, the nurse came to give me breakfast and found my husband cradling our newborn daughter while I was scrunched up in a ball on the floor, crying.”

Fortunately, Anita’s nurse suggested to her obstetrician that he refer her to a dedicated mother and baby unit in a private psychiatric hospital in Brisbane.

“I went straight from the maternity hospital to the psychiatric hospital. Two days later, I experienced a severe psychotic episode during which I completely lost touch with reality. At one point, I denied knowledge of my husband and baby. Luckily, I was in the right place when those symptoms hit,” Anita said.

Anita was subsequently diagnosed with post-natal psychosis and admitted to the special care unit (a high security locked ward in the same hospital). Her husband returned home with their one-week-old baby.

“Because I was diagnosed immediately and started on high-dose anti-psychotic medication, I was well enough to return to the mother baby unit within a week. That’s when my psychiatrist explained I was at risk of developing rebound depression and may have underlying bipolar disorder, although he couldn’t be certain until the emergence of a pattern of illness within another three to five years,” said Anita.

A month later, she fell into a “nasty depressive episode which spiralled into catatonic depression” (when one is barely able to move and speak). None of the antidepressant medications Anita was started on, worked.

She subsequently underwent a course of electroconvulsive therapy (ECT) which proved helpful. Anita finally returned home when her daughter was four months old.

Nearly three years later, and following extensive counselling with a psychologist, Anita and her husband decided to have another baby. Unfortunately, Anita developed anxiety and depressive symptoms during her pregnancy and required hospitalisation. Her son’s birth was a joyful occasion, but despite taking numerous precautions, Anita experienced another severe psychotic episode six weeks after the birth, which again rendered her hospitalised in the mother baby unit. She was then officially diagnosed with bipolar I disorder and spent the first year of her son’s life in and out of hospital with depressive episodes.

Since then, every two to three years Anita has experienced severe, manic and/or psychotic episodes, which are sometimes followed by rebound catatonic depressive episodes. The debilitating nature of these episodes usually renders her unable to function at home. The length of her hospital admissions ranges from four weeks to four months.

“It’s difficult for my family, but it’s important to view bipolar I disorder as no different to any other illness for which you would undergo treatment in hospital. I am fortunate to be able to afford private health insurance, which gives me access to the highest quality of hospital care. I’ve also always had the same psychiatrist, and this continuity of care has been crucial to each recovery,” Anita said.

Medication has played an important role in managing Anita’s illness. Although treatment has come a long way, Anita believes medications could be better tailored to the individual, given the trial and error involved in finding the right psychiatric medication for each patient. A healthy lifestyle, including exercise, has also been crucial to maintaining periods of wellness for Anita.

“Over the years, I’ve taken anti-psychotics, mood stabilisers, anti-depressants, and benzodiazepines to assist my sleep. But what works for one person, does not necessarily work for the next.”

Anita is encouraging Australian adults who have been treated for bipolar disorder to volunteer for the Australian Genetics of Bipolar Disorder Study – a ground-breaking, international collaboration exploring the genetic risk factors associated with the illness, and how genes influence one’s response to treatment. QIMR Berghofer Medical Research Institute is leading the study, and Anita genuinely hopes her contribution will allow experts to unravel some important answers to help treat bipolar disorder.

“I do think genes play a role in bipolar disorder, but I don’t think that’s all there is to it. I do however, have a first cousin with bipolar I disorder, my sister has an anxiety disorder, and both of my grandmothers experienced depression.

“There’s still so much to learn about mental illness, and unfortunately, there’s a lot of information available that’s not supported by scientific evidence,” said Anita.

“Many people are caught in a vicious cycle. They are undiagnosed, misdiagnosed or do not access treatment, which can result in collateral damage, including loss of accommodation, income, and close relationships. This can lead to silence on the topic, which further heightens the stigma surrounding all mental illness, particularly for those with symptoms of psychosis.

“Any study that can advance the knowledge of bipolar disorder will hopefully assist with treatment, while promotion of this study will help to reduce the stigma surrounding this illness,” Anita said.

Anita believes she’s had “a relatively good experience with bipolar I disorder” – a quick diagnosis, appropriate treatment, and continuity of care due to her access to private health insurance.

“Having private health insurance has been a big help for me in managing my bipolar disorder because it has given be access to a broad range of treatments and continuity of care.”