Childcare worker and musician, Alex, 21, Sydney, has lived with the symptoms of bipolar disorder since the age of 14. Initially suspected to be battling depression and anxiety, Alex was eventually diagnosed with bipolar I disorder by a psychiatrist two years later, at just 16. 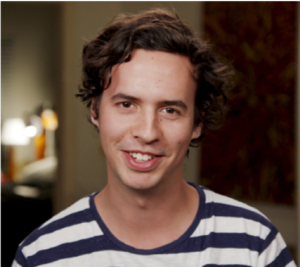 Having taken a plethora of medications for the past seven years, Alex has only recently been able to keep his symptoms, including mania, severe depression and psychotic episodes, under any semblance of control.

Despite almost missing out on completing his HSC due to frequent hospitalisations, Alex is now enjoying life, working with primary school children while writing music and playing keyboard in his spare time.

Alex is participating in the Australian Genetics of Bipolar Disorder Study to help raise awareness of, and assist researchers to identify the genes responsible for bipolar disorder, to ultimately improve treatments for the illness.

This is Alex’s story.

“Looking back, there wasn’t one experience that triggered my onset of symptoms, but I remember feeling very depressed when I was about 14 years of age, and I didn’t know who to turn to.

“I used to cut myself all over my body and would often feel extremely depressed,” said Alex.

“When I first saw a doctor, they assumed I had depression, but even with medication, I wasn’t feeling any better. Luckily, my parents encouraged me to keep seeking help, and eventually I met with a psychiatrist whom I could trust and open up to.”

According to Alex, the time and attention to detail his psychiatrist invested in him led to his diagnosis of Bipolar I disorder.

“It made sense that there was something more going on, because I was also having these manic highs, which always resulted in a big come down.

“A lot of people experience different symptoms of bipolar disorder. I experienced psychotic episodes which materialised in auditory and visual hallucinations. This happened particularly during high school, when I heard things that actually weren’t there,” Alex said.

“As I got a bit older, the hallucinations manifested visually, and I also suffered from strange delusions.”

Alex found himself unable to concentrate at school and had to miss his entire final year 11 term. Luckily, he was a talented musician and able to continue music into year 12. Frequent hospitalisations meant he couldn’t complete his final HSC exams with the rest of his classmates but his school supported him in submitting a misadventure form, which meant he was able to earn his qualification after previously sitting trial exams.

“I was in hospital a lot during school. My medication stopped me from being able to focus and made my head very foggy. So it was an extremely tricky time for me to try to lead a normal teenage life.”

Regular visits to his psychiatrist, as well as meditation and walking, helped Alex to secure a job in childcare, a profession which he has maintained into his twenties.

“I’m really lucky that my current primary school employers are entirely accommodating and let me take time off whenever I’m in a bad space.

“But I did have an employer who pressured me to return to work when I still should have been in hospital getting better,” said Alex.

It took Alex years before he found the right medication for him, and he still needs to have processes in place for when he feels the onset of depression.

“I’m pretty good at spotting when I’m going to feel depressed these days, and I have an action plan to help deal with the situation better, which includes getting enough sleep and going on walks.

“I still have episodes I need to manage. I ended up in hospital for three weeks in March this year after the change in season triggered my symptoms. I was hallucinating for three months before telling anyone because it was a positive hallucination and it took a while before it began to have a negative impact on me,” Alex said.

Nowadays, Alex recognises how tough his bipolar diagnosis was on his parents, two sisters and brother. They’ve been a fantastic support network for him and now he wishes to share his experience to help other families going through the same thing.

“It must have been really difficult for my family when I was first experiencing symptoms of bipolar disorder and I remember my youngest sister crying whenever I had to be admitted to hospital.

“I didn’t get help straight away and I should have, because I went through some really dark times,” Alex said.

“Kids feel embarrassed to approach the school counsellor in front of other students because they think they’ll be judged for having something wrong with them,” said Alex.

“I want to reduce the stigma around mental health, help people understand it, and not be afraid to ask for help. You can always get better.”

Alex is encouraging Australian adults who have been treated for bipolar disorder to volunteer for the Australian Genetics of Bipolar Disorder Study – a ground-breaking, international collaboration exploring the genetic risk factors associated with the illness, and how genes influence one’s response to treatment. QIMR Berghofer Medical Research Institute is leading the Australian arm of the study, and Alex genuinely hopes his contribution will allow experts to unravel some important answers to help treat bipolar disorder.

“I believe there is a genetic link to developing bipolar disorder. We’re pretty sure my grandmother had the disorder, although she was never diagnosed because it was so stigmatised when she was alive.

“If, in the long-term, the Australian Genetics of Bipolar Disorder Study can help people get on the most appropriate medication for them, sooner, then that will positively impact so many lives,” Alex said.