Aquaculture technician who loves to camp and four-wheel-drive with his mates on weekends, Justin, 31, Hobart, was free of any signs of mental illness until experiencing a mental breakdown in 2006 at the age of 19 following the death of a family member. 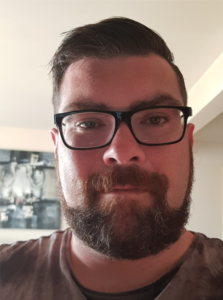 After this incident, Justin’s life spiralled out of control, and he recalls plunging into a battle with drug and alcohol abuse and unemployment.

Justin quickly grew angry, aggressive, and even attempted suicide. After being diagnosed with type II bipolar disorder and post-traumatic stress disorder (PTSD) in 2010, Justin experienced highs and lows, causing him to push his friends and family away. Meanwhile, Justin continued to use recreational drugs.

It wasn’t until 2014, after moving back home, and with the unrelenting support of his parents, that Justin finally managed to curb his marijuana addiction and to eventually steer his life back on track.

In 2017, after a relapse resulted in a refined diagnosis of type I bipolar disorder (rapid cycling) and a medication change, Justin emerged feeling the best he had in years.

Justin has chosen to participate in the Australian Genetics of Bipolar Disorder Study to help raise public awareness of, and assist researchers to identify, the genes responsible for bipolar disorder to ultimately improve treatment for the illness.

This is Justin’s story.

“Living with bipolar disorder is like a roulette wheel, with various mood states replacing the numbers and ranging from depression, to mania, and everything imaginable in between,” said Justin.

“I lived constantly at the mercy of my illness for years.

“With rapid-cycling bipolar disorder, I experience ups and downs by the hour. My mood swings are unrelenting. No matter how hard I tried to overcome them, for years I was hijacked by whatever mood was the flavour of the hour,” Justin said.

Fortunately, Justin’s current medication regime allows him to both anticipate and prepare for a change of mood, putting him in a much better place now.

“The new meds have allowed me to feel a mood swing coming on. Although I can’t change my mood, I can identify it, prepare for it, and let people know what’s going on.

“However, I still need to check in with my psychiatrist once a month. His support has been outstanding. In fact, I’ve never met a doctor who shows so much empathy,” Justin said.

“I also see a psychologist on a regular basis to deal with my PTSD.”

Justin is encouraging Australian adults who have been treated for bipolar disorder to volunteer for the Australian Genetics of Bipolar Disorder Study – a ground-breaking international collaboration exploring the genetic risk factors associated with the illness and how genes influence one’s response to treatment. QIMR Berghofer Medical Research Institute is leading the research and Justin genuinely hopes his contribution will allow experts to unravel some important answers to help combat bipolar disorder.

“I think genes play a huge role in a person’s predisposition to any mental Illness. In my experience, my bipolar disorder was a sleeping dragon, and it just took a trigger to awaken the beast,” said Justin.

“Bipolar disorder and mental illness are prevalent on my father’s side of the family. Two other family members and I all have bipolar disorder.”

By sharing his story, Justin hopes to empower others experiencing battling symptoms of bipolar disorder to seek the professional help they may require and to urge those who have been treated for the illness to volunteer for the Australian Genetics of Bipolar Disorder Study.

“I strongly believe that any adult who has bipolar disorder, and is willing, should participate in this ground-breaking study. The greater the number of volunteers, participants, the more data will be collected, which should hopefully pave the way for earlier diagnoses, better support and more effective treatments for the illness,” Justin said.

“I also encourage anyone with symptoms of bipolar disorder to speak up and be open about what they are experiencing. Don’t let a label define you. Talk to your friends and family to help shake the stigma surrounding bipolar disorder.

“The age of acceptance is upon us, and with the right support network, health professionals and medication, bipolar disorder can be effectively managed,” said Justin.